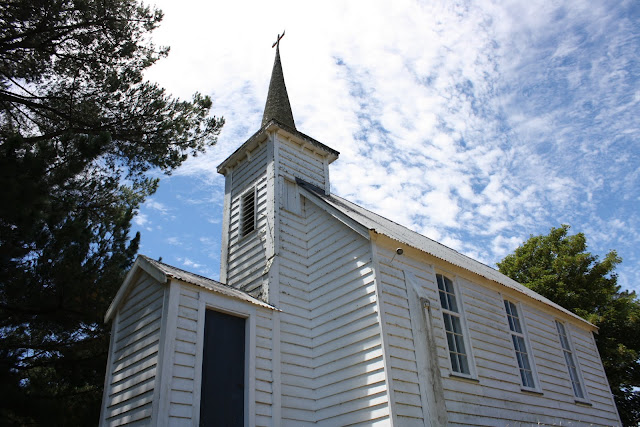 The Norwegian Methodist Church sits on a hill above North Road, in Mauriceville North .  It has a Category 1 Heritage New Zealand listing: Number 204. 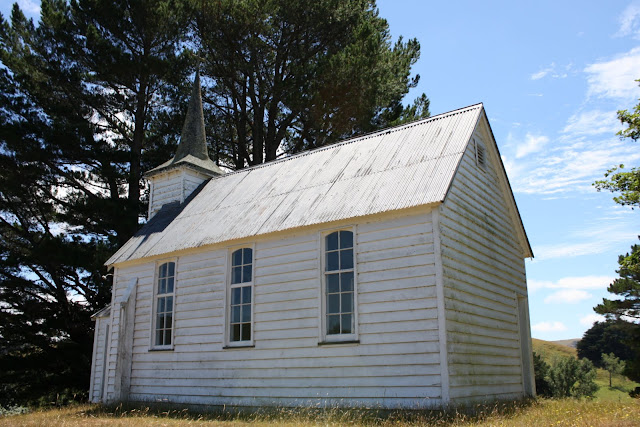 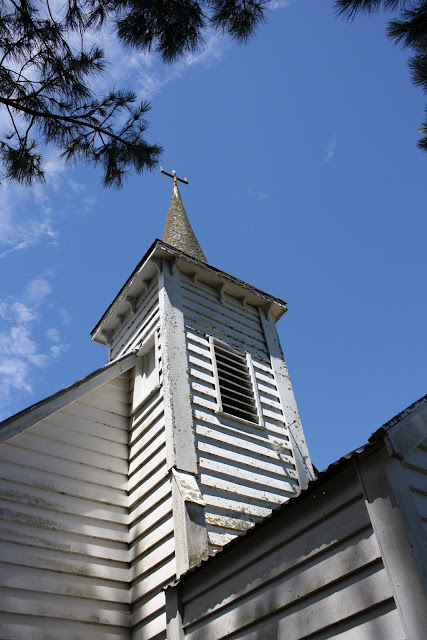 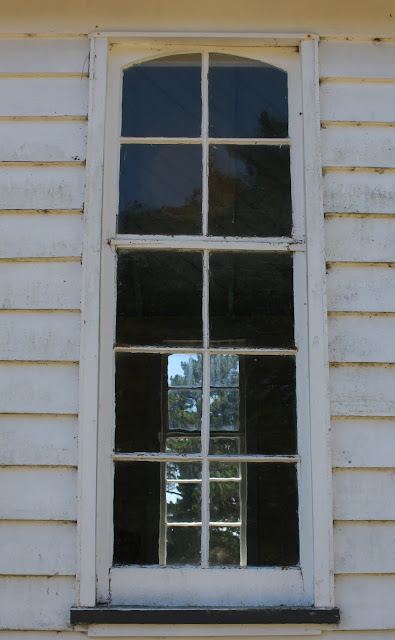 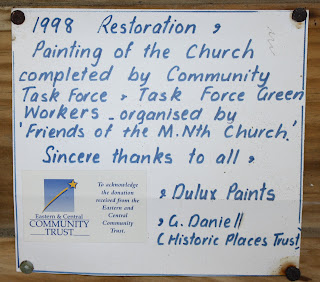 Artifacts, likely to be the 'memorial stone,' found under the altar when the church was restored. Items within it appeared to have perished by the time it was found in 1998.

An account of the opening, in the Wairarapa Daily Times, includes the following:


"Pastor Christofferson read a document containing the history of the Mauriceville mission up to that date. This in Scandinavian, and a translation into English, with a New Testament, a copy of New Zealand Wesleyan for July and one of most recent copies of the WAIRARAPA DAILY were in due time deposited in a cavity of the memorial stone."

As part of the immigration programme set in place by Julius Vogel's government to clear the Forty Mile Bush, the Norwegians settled in Mauriceville North. This settlement was physically separate from the Danish community in Mauriceville West as there was no road over North Hill.


The original Danish church had a solid square tower, reminiscent of the large stepped towers of Danish country churches, which were designed to provide a refuge for the community in case of hostile invasion. Norway, where cliffs and mountains were predominant, meant such towers were not necessary and so the churches were built with pointed steeples.

Men sat on the right side of the aisle, while the women, wearing picturesque coloured scarves on their heads, sat on the left. During the day three services were held, making eight hours in total.

An account of the opening of the church appeared in the Wairarapa Daily Times:

﻿OUR SCANDINAVIAN MISSION
[Abrigded [sic] from the New Zealand Wesleyan.]

When the train arrived at Masterton, at 10 o'clock on the morning of the 9th of July there was ready a trap with an intelligent driver in charge, waiting for the English preacher. In a very short time we were on the Opaki plains, and turning to the right, crossed a new bridge and went on the main road beyond, bending round to due north. Skirting some low hills we soon came again to open ground again; and a few miles further on we saw the dense bush, right and left, in every increasing quantity. A little beyond Dreyerton--nine miles north of Masterton--the scenery became more and more grand. All the materials for magnificent scenery were there--the immense trees were rearing their heads in the bright sunshine--totara, matai, rimu, and other varieties in great profusion. On either side were what poets call "the everlasting hills"--at any rate, the hills were there; but so thickly covered with forest trees that you could only see the rough outline of them.

At last we turned off the main road to the left, ascending a hill and then descending into a finely-wooded valley--the outskirts of Mauriceville. Then we drove up the winding road of another ascent, and came to Mauriceville South. The settlers here had been industrious, and the forest was being transformed into small fertile farms. One more ascent, and then, when we had reached the summit, another valley appeared in sight. In a few minutes the larger part of Mauriceville North was visible. The most prominent feature in this settlement is our new church. It is built on a jutting knoll, part of the range of low hills on the right, and some fifty feet above the road. In front of the Church was a small flagstaff, to which was attached a red and white flag. Two other flags or banners, were gaily flying on or near the Church, on one of which was inscribed "Faith, Hope, and Charity."

At 3 p.m. 9th of July, the first service was held in the new Church. A foundation, or memorial stone was duly laid inside and beneath the communion rail. Pastor Neilson had travelled from Norsewood in order to be present and assist on this festive occasion. He and the resident pastor took an active part in the services. The Rev W.G. Thomas, from Greytown, gave an address explanatory of the doctrines, Sacraments, and discipline of the Christian religion as held by the Methodist Churches, Pastor Neilson translating it into Scandinavian. The people sang with all their hearts--"both young maids and men, old men and children." And when it was the music of their father-land, led by the good and clear voice of Pastor Neilson, the effect was most edifying. Pastor Christofferson read a document containing the history of the Mauriceville mission up to that date. This in Scandinavian, and a translation into English, with a New Testament, a copy of New Zealand Wesleyan for July and one of most recent copies of the WAIRARAPA DAILY were in due time deposited in a cavity of the memorial stone. Towards the close of this deeply interesting service came the collection. Neither the collector nor the people appeared to be at all scared at the sight of the bright plate that was passed round in the presence of the large congregation. I frankly confess it did my heart good to see how they managed the whole affair. There was no hurry, as if this, a necessary piece of business, must be got through with the utmost possible speed on account of its unpleasantness. The collector stood before you for a few seconds, and in the most modest and yet manly way, gave the impression that he expected you to contribute something, and that he was quite willing to wait in order to give you time enough to produce the cash. In about 9 or 10 minutes everybody had the opportunity to give, which they did in the most willing and cheerful manner.

It may be well here to give a short description of the church and congregation. The building, outside measure, not including the base of the spire, is 31ft. 6in. by 18ft. It is capable of seating, with the gallery, 100 people. A good bell has been suspended in the tower, which is useful in such a scattered district in giving the people far and near due warning of the approaching service. The cost of the church, labor estimated and money given, amounts to £149 17s. Before these services were begun, the total debt was £11. Pastor Christofferson both planned and, to a very large extent, built the church with his own hands. His good lady did all the painting of the church, and a very good job she has made of it. On the Saturday and Sabbath the collections reached £6 0s 2d, leaving at that time the small balance of £5 deficit on the whole affair.

A central aisle divides the interior sitting accommodation. On the right hand side, as you enter the church from the front, are seated the men, and on the left the women. As a whole, both were intelligent looking, and most devout in their worship of God. In evidence of their intelligence, I noted the precision and accuracy in their enunciation of the vowels as they were singing together. Few English congregations pronounce their vowels so accurately. The women were remarkably neat in their appearance. Several of them--not yet Anglicised--wore colored handkerchiefs round their heads. Others had got more fully tinged with English notions about dress. Almost without exception, the attire was simple, neat, and good. All were good hearers: and, although only a part of the English portion of the services was understood by them, the attention and interest were well maintained throughout. The four services altogether occupied nearly eight hours, but I don't think I saw one person taking out his watch and clicking it as a broad hint to the preacher that he had had quite enough for that time. All seemed eager to hear about God and Jesus Christ who he has sent.  W.G.T.


Until their own church was completed the people from the main settlement attended the north church, the children walking five miles and more to Sunday School.

ln later years a Lutheran church was erected at Hastwells about a mile north of the Wesleyan church, services being conducted by the minister from Mauriceville West.

On 9 July 2006 the church celebrated its 125th anniversary with a special service.


Today
Services are held approximately four times a year, in months in which a fifth Sunday occurs.

Popular posts from this blog

October 18, 2010
St Francis, from the eastern side of the churchyard The Church of St Francis of Assisi sits on a terrace, high above the Tauweru River. It was built in 1875, on land donated in 1878 to the Church of England by David Carman, a former owner of parts of Bowlands. It has a Category II heritage listing, register number 1285 .
3 comments
Read more

March 01, 2011
All Saints Anglican Church, Wairongomai, is framed from the road by an avenue of karaka trees and continuous low hedging, leading the eye to the beautiful church.  It is one of the most elegantly landscaped rural churches in the Wairarapa and is listed on the Wairarapa District Plan (HS159)
Post a Comment
Read more

Please do not use photos on this blog without permission.